Over the past month, the race for the presidential election has heated up significantly. Candidates have been battling non-stop in hopes of securing votes, including several candidates with extended efforts from minority demographics. However, how are these candidates performing in everyday conversation among Latino voters? As the Arizona Primaries were occurring this past week on March 23rd, OYE! technology was used to determine performance for presidential candidates in this important state of 133 total delegates. In this analysis, OYE! technology reviewed all Arizona Hispanic conversations about the remaining five candidates from the Democratic and Republican parties from March 13 through March 21. 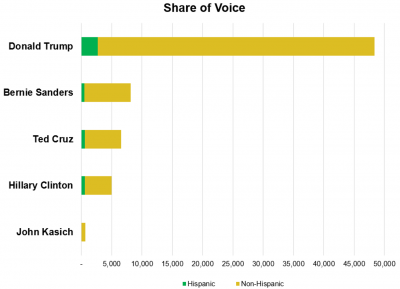 Over a nine day period leading up to the primaries, OYE! technology probed the internet including social media and mainstream news in search of all mentions regarding these five leading politicians. The tool found that among non-Hispanics Donald Trump had the most mentions, controlling 70% of all political candidate mentions in Arizona. Mr. Trump also led Hispanic mentions in absolute volume, however only 6% of mentions were from Hispanic profiles verified by OYE.

Although Hillary Clinton came fourth in overall mentions, she had 11% of the conversation coming from Hispanics, the highest proportion of all candidates and slightly higher than Ted Cruz who had the second highest proportion at 9% Hispanic mentions. 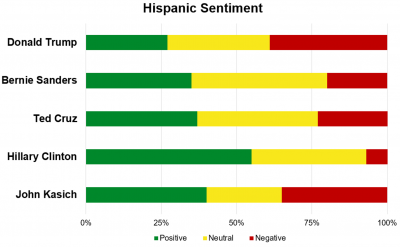 Sentiment among Latino Voters and Non-Voters 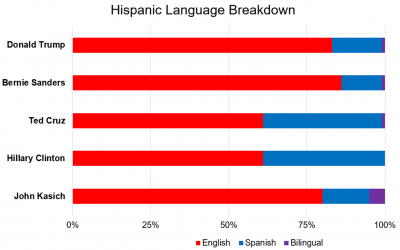 The OYE! platform evaluated which language Arizona Hispanics used when mentioning each of the candidates and found that the majority of conversations were in English (82%). Spanish was used in 17% of these posts while only 1% of the conversation among the Hispanic community was bilingual, meaning at least one word was in English and one word was in Spanish. Out of the five candidates, Ted Cruz (38%) and Hillary Clinton (39%) had the most mentions in Spanish.

The overall gender breakdown consisted of Hispanic women leading the conversation with 57% of all mentions, while men posted 43% of the overall conversation. Mentions of Bernie Sanders were most often by Hispanic women (65%), slightly higher than mentions about Hillary Clinton (64%).

This analysis was created from a sample of 100,000 mentions of any of the top 5 political candidates which also mentioned Arizona cities in which these candidates were campaigning including Phoenix, Flagstaff, and Fountain Hills. All mentions were gathered from Twitter, Facebook, Blogs, Forums, and the web at large. All data was pulled from March 13, 2016 – March 21, 2016.

OYE! is a business intelligence tool serving well known clients including Big Lots, MassMutual, Square, Schwarzkopf, and White Castle that provides organizations with unique insights into Hispanic conversations online, regardless of the language they speak.
This tool effectively tracks, segments, and monitors real-time online conversations so our clients can make educated business decisions and develop culturally relevant communications with the fastest growing ethnic group in the U.S. OYE! provides an affordable business intelligence solution for brands, government agencies, political parties, nonprofit and educational organizations, PR agencies, and any other entity interested in communicating with Hispanics
Want to learn more about how OYE! produces these Hispanic insights?  Complete the form below or send an email to info (@) oyeintelligence.com and we will contact you promptly.