The second presidential debate on September 16th was heavily discussed online, and of course Latino conversation was a major driver of the total online volume. OYE! tracked Hispanic online mentions via Twitter and Instagram following the top 14 candidates for the 2016 presidential elections to find what has changed since the first analysis on the Latino Vote performed this past April. Consistent with the last study we performed in July, Trump was still dominating conversation, owning 19% of the total volume among Hispanics on Twitter and 70% of the conversation on Instagram among all Republican candidates. This compared with 41% of mentions for Trump from non-Hispanic Twitter users. Trump also led in proportion of negative sentiment among all mentions, with 5% total on Twitter.

Rand Paul had numerous memorable moments throughout the night, and benefited in online awareness by commanding 17% of the total Hispanic conversation on Twitter. Paul was also the second most discussed candidate among non-Hispanics with 12% of that conversation. Notable as well is that there was less than 1% negative sentiment for Paul, versus 5% for Trump. However, on Instagram he only produced 2% of the total Hispanic conversation among the Republican candidates, compared to Trump’s 70%.

Marco Rubio – Big with Hispanics, not so much with Non-Hispanics

Senator Marco Rubio was the third leading candidate among Hispanic online conversation on Twitter. He provided 15% of total mentions that night and had less than 0.5% negative mentions. However, with non-Hispanics he ranked at only 6th place, with a mere 4% of online mentions. Among Hispanics on Instagram, Rubio was mentioned 5% of the time (5th place). 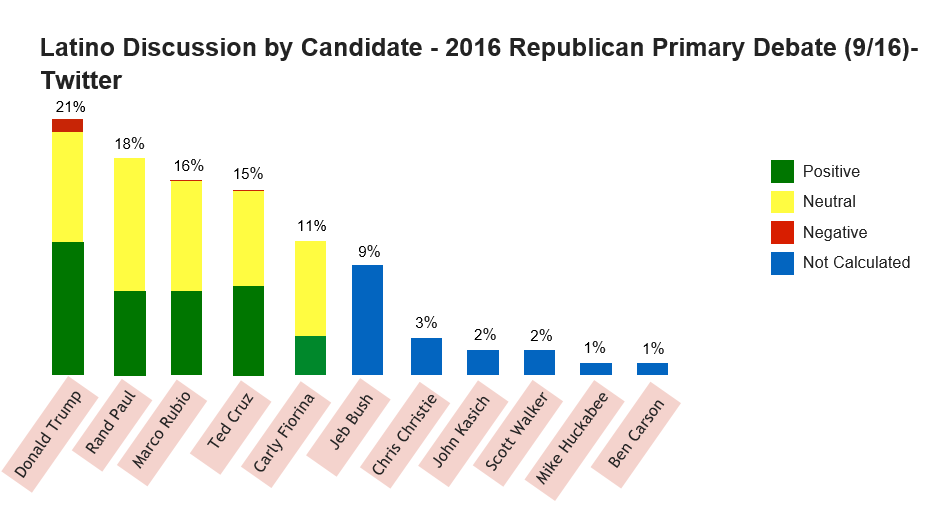 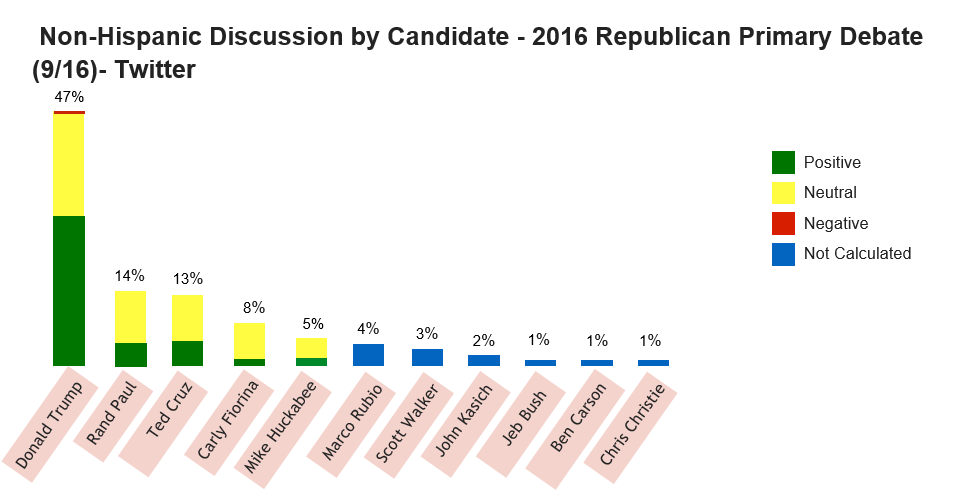 Bernie Sanders took over the Democratic Hispanic conversation on Instagram with 66% of total mentions compared to Hillary Clinton with only 14%. On Twitter, Hispanics mentioned Clinton (57%) significantly over Sanders (42%). It was interesting to see that Joe Biden commanded the second most mentions on Instagram (19%) compared with a rather dismal awareness found on Twitter, with only 2% of mentions among Hispanics and less than 1% with non-Hispanics.

Today’s insights were interesting, especially in the emergence of conversation for Rand Paul and Marco Rubio’s absence from discussion among non-Hispanics. Also notable was that John Kasich had zero mentions among Hispanic Instagram users. We will continue to monitor this conversation and see how it changes as the political process continues.

This analysis covers over 2,500 verified Hispanic conversations gathered from Twitter and Instagram about the topic of the 2016 Presidential debates.  A sample of 10,000 non-Hispanics conversations were analyzed as well to provide comparisons between ethnicity. All data was pulled between September 16th –and September 17th of 2015. If you would like to learn more about Presidential candidates analysis, contact us at info (@) oyeintelligence.com.

OYE! is a business intelligence tool serving well known clients including MassMutual, Square, Schwarzkopf, and White Castle that provides organizations with unique insights into Hispanic conversations online, regardless of the language they speak.
This tool effectively tracks, segments, and monitors real-time online conversations so our clients can make educated business decisions and develop culturally relevant communications with the fastest growing ethnic group in the U.S. OYE! provides an affordable business intelligence solution for brands, government agencies, political parties, nonprofit and educational organizations, PR agencies, and any other entity interested in communicating with Hispanics

Want to learn more about how OYE! produces these Hispanic insights?  Complete the form below or send an email to info (@) oyeintelligence.com and we will contact you promptly.