The 2018 Midterm elections are as important as ever. While most people are only invested in their local and state politics, it is important to understand the big picture as well. On November 6th we will know the ongoing party majority of U.S. House and Senate, as well as the party in the governor’s chair for many states. With the current political climate, people are clamoring to know if the campaign #FlipTheHouse, in favor of the Democrats (the Blue Wave) will rise against or succumb to the Republicans (the Red Wave). Through our social listening technology, we were able to look at online conversations to see who is talking about the upcoming elections, where they are, and what they are saying. OYE collected 150,000 posts in total during the week before the Midterms from 10/24/18 – 10/31/18.

So in an attempt to predict what’s going to happen, we need to understand what’s at stake.

Currently, the Republicans hold a 235-to-193 majority in the House in which all 435 House seats are up for grabs in the upcoming election. This will be a much easier majority to flip.

Republicans also hold a party majority in the Senate, 51-to-49 against the Democrats. There are 35 Senate seats open in 2018 in which 26 are currently held by Democrats. The Blue Wave will need to keep those 26 as well as gain two additional seats in order to become the new majority; a much more difficult flip.

Nine of the most populous states will be electing new governors, six of those nine are already Republican. While most can predict the outcome of states like California (blue) and Texas (red), other states such as Illinois, Florida, and Michigan are up in the air and everyone is dying to know the outcome.

Out of all elections, these were the hot spots of political discussion. Below, we can see that from New York City came the greatest amount of active online conversations and just behind it, we see Washington D.C. and Los Angeles with the next greatest quantities of discussions. Note that states including Colorado, Nevada, Florida, Illinois, and Michigan also have hot spots of activity, all of these which could fall either way.

As far as who is talking about the upcoming elections, there were 4,895 verified Hispanics and 2,872 African Americans that were part of these political conversations tracked by OYE. In the face of Trump’s administration, women and minorities are often targeted or expected to be a part of the Blue Wave. Contrary to that belief, our software captured more conversations from males across the three major ethnicities in the U.S. In the 2016 election, more African American women voted Democrat and more white women voted Republican. Seeing more conversations and vocal political alignments from not just males across the board, but also seeing fewer minority women taking part in the online conversation about the Midterms, is an indication already that November 6th might look like a Red Wave.

In terms of what people were talking about, our software was able to categorize the conversations about the Midterms. While we can see that most people were focused on getting out to vote in general, we also see political alignments between Republicans and Democrats. Both of these categories would have consisted of keywords associated with the campaign. For example, the Vote Republican posts had keywords such as “Red Wave”, “Vote Red”, and “KAG” or “Keep America Great”. Vice versa, the category Vote Democrat has posts with keywords such as “Blue Wave”, “Vote Blue”, or “Flip The House”. Across all ethnicities, we can see that Vote Republican has a greater percentage than Vote Democrat and an overall majority in volume of posts at 7,002 total versus 4,478. Note that Donald Trump is also an important category; however, those posts are both in favor and against the current president.

All in all, it seems the Republicans and the Red Wave are at least more vocal about their political alignments and while that reflects real people who are going to vote on November 6th, it also isn’t a sure thing. It could be that Democrats are less likely to be outspoken on their political alignments or it could be that there are many undecided voters that aren’t committed to a specific wave. Either way, on November 6th we’ll better know the political trajectory of our country in the years to come.

If you would like to see a more in-depth report about the elections, we also ran data analysis the month leading up to the Midterms here.

For more information about this study, please contact Natasha (at) oyeintelligence.com. 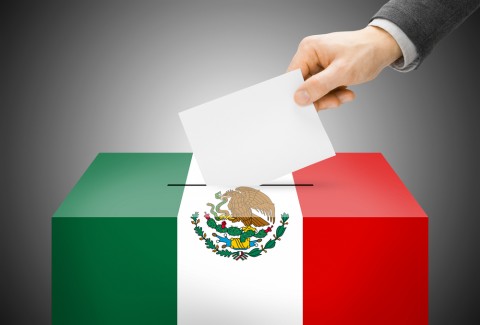 Entering the fourth week the 2016 Latino Political Tracker, OYE! continues to analyze conversations of U.S Hispanics including a...

This week was the start of the first Presidential Debate this past Monday and OYE! analyzed gender, language, sentiment,...

In this third weekly analysis, OYE! continues to analyze gender, language, sentiment, and share of voice among U.S. Hispanics... 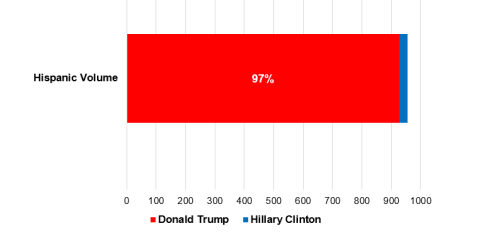 2016 Hispanic Political Tracker The OYE! team is proud to welcome you to a new weekly analysis, termed the...