During Hispanic Heritage Month, it is common to find  brands discussing how they celebrate and respect the Latin culture during the month long celebration. Brands also of course have to be careful to not be called out for Hispandering, as Coca-Cola was the victim of this year. To gather in this data on brand activity, OYE! researched the top 100 brands according to Forbes and reviewed data starting on September 8th (a week prior to the kickoff to gather any announcements of anticipated events and celebrations) all the way through October 15th. 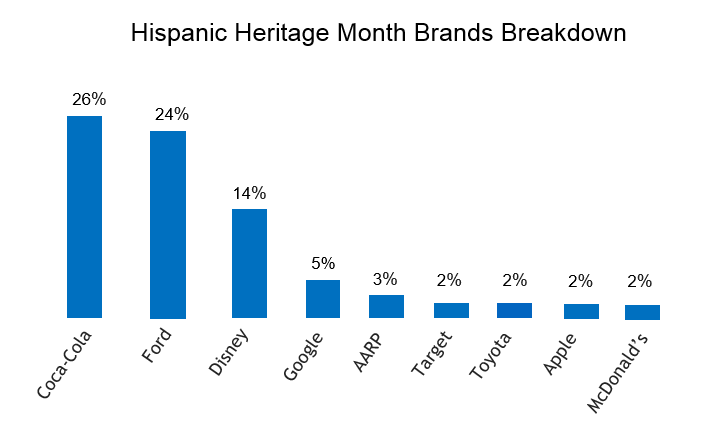 Coca-Cola used their hashtag, #OrgullosoDeSer (#Proudtobe) during the month encouraging people to share their passion and pride in their last name and heritage with the hashtag #OrgullosoDeSer followed by #[LastName]. This campaign caused the brand to lead all mentions with a full 26% of all mentions. Ford came in second with 24% of Brands conversation using campaign the campaign hashtag #MiTradicionHispana (#MyHispanicTradition) through their Spanish social media account Ford en Español. 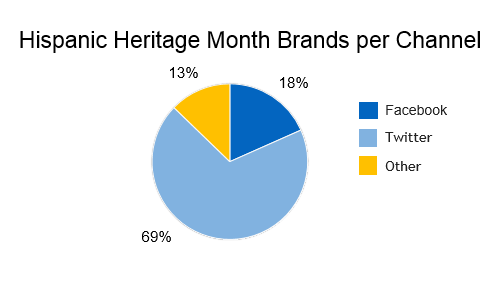 With the two hashtags mentioned above for Coca-Cola and Ford, there was no surprise that users tweeted most often about brands (69%), compared to all other channels. Disney also had their hashtag, #DisneyFamilia, which shared employee biographies from around their parks and celebrated diversity.

The majority of conversation was found to be neutral (60%), meaning that positive sentiment posts (40%) were lower than HHM posts about politics (45%) and the overall conversation (50%). 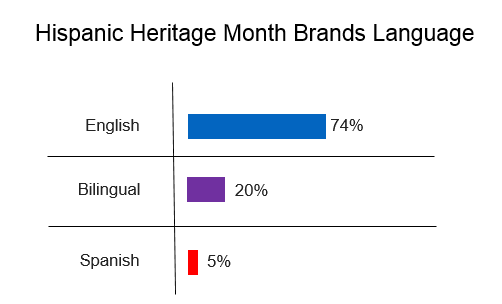 Keep an eye out and subscribe to the OYE! monthly blog update here as we will be posting additional topic breakdowns of Hispanic Heritage Month conversation including a focus on: 1. Overall 2. Sports 3. Politics 4. Celebrities 5. Universities.

Desiring more info on Hispanic Heritage Month? Let us know what topic you are curious about and we will be happy to provide a sample data set for you. Contact us using the form below.

This analysis covers over 44,000 conversations gathered from Facebook, Twitter, blogs, and forums about the topic of Hispanic Hertiage Month. All data was pulled between September 9st and October 15th of 2015.