Having just concluded Hispanic Heritage Month (HHM) from September 15 – October 15, the OYE! team decided to have a look at numerous topics and industries to see what types of conversation could be found during this important month celebrating Hispanic culture. In certain topics including Hispanic brand conversation and Latino political conversation we looked at specific mentions of HHM, while in this report for baseball we focused on overall conversation without necessarily mentioning HHM. We instead researched which teams had a Hispanic marketing Major League Baseball strategy specifically with a Spanish or bilingual social media campaign currently active.

Many major league baseball teams had their own hashtags in addition to a Twitter account, like the Miami Marlins with #LosMarlins or the Chicago White Sox with #MediasBlancas. Overall, the top teams that generated conversation in the MLB were the Diamondbacks with 23% of the overall conversation, Yankees with 14% and the Dodgers and Mets, each with 8% of  the conversation. The Nativa agency interviewed Jerry Romo who is Manager of Hispanic & Emerging Markets at the Diamondbacks to learn more about how they drive this conversation on social. 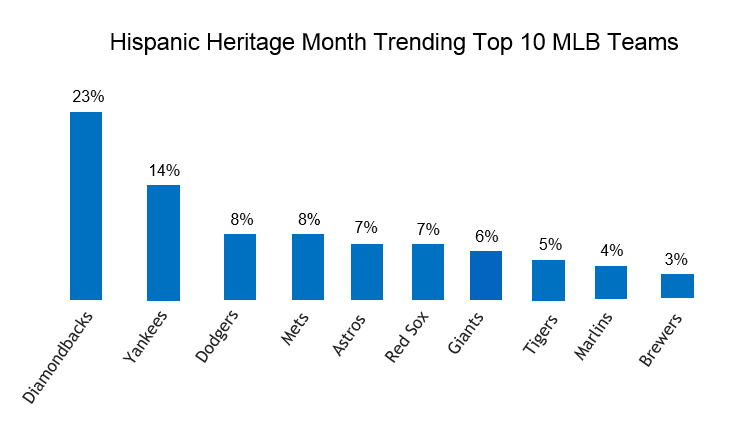 The majority of sentiment was considered neutral (50%) which included mentions of activities and scores, while 45% of all mentions was found to be positive which ranged from mentions from Hispanic fans excitement attending the game, to images of celebrating fans sharing photos of their favorite performers at Hispanic themed games in honor of HHM. There was very little negative sentiment at just under 5% overall. 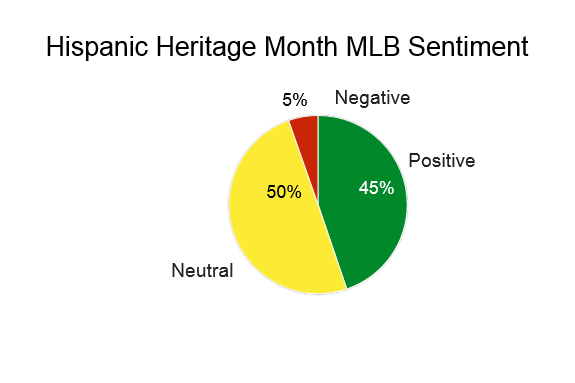 An example positive mention from an Angels fan is below:

Since OYE! used Spanish and Bilingual hashtags and keywords, the conversation was naturally omitting of English-only content and was powered by 87% Spanish and 13% Bilingual. 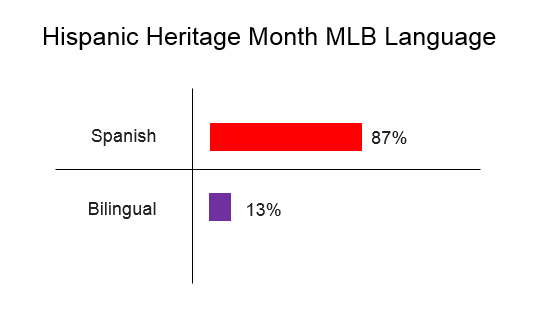 Here is an example of a bilingual mention from an oft-retweeted Astros post:

This analysis covers over 29,000 conversations gathered from Facebook, Twitter, blogs, and forums about the topic of Major League Baseball during Hispanic Heritage Month. All data was pulled between September 4th  and October 4th of 2015 to coincide with the last month of the baseball season.