Innovation From a Female Perspective: CES 2019

CES For The First Time: Innovation From a Female Perspective

For over 50 years, the International Consumer Electronics Show (CES) has gathered the most creative and visionary minds from around the word. This year over 180,000 attendees were able to test, learn and connect with 4,500 exhibitors and 800 startups in Las Vegas. My business partner Eric Diaz and I were invited by Southwest Airlines to attend this conference and have a first-hand experience of the latest innovations, as a co-founder of OYE! Business Intelligence and  Nativa, a communications agency driven by innovation, our team not only identifies cutting edge technology in marketing and communications, but we execute our vision through strategic partnerships and collaboration with organizations that support forward-thinking minds. That’s how OYE! Business intelligence was created and why I was so eager to attend CES 2019 as Southwest’s Key Online Influencer.

As a female in tech and communications, I’m always drawn to see the name of speakers, sessions and work ahead on my game plan. In prior years CES had received backlash for the lack of diversity – females, black, Latinx, Native American or LGBTQ keynote speakers or panelists. This year however, 4 of the 9 keynote speakers were females that included women of color. Furthermore, The Consumer Technology Association (CTA) that produces and owns CES announced that it would be investing $10 million in venture capital to support women, people of color and other underrepresented entrepreneurs.

At the conference I was able to meet and learn the story of several female founders and technologists, I particularly enjoyed seeing products designed by and for women like Willow 2.0 a wearable breast pump, the Efelya pregnancy app that allows moms to monitor potential health risks. Practicability is also important, so Rachel Vicknail, Leopara CEO, designed a travel makeup lighting system that’s wireless and rechargeable, perfect for women on the go!

Even though the majority of attendees, presenters and exhibitors were males, I enjoyed seeing large crowds of females and panelists, two particularly interesting panel presentations that relate to my work were the “New Rules of Engagement in the Disrupted Age” given from the view of five female power houses. Janet Balis, EY; Danielle Lee, Spotify; Tara Walpert Levy, YouTube; Lilian Tomovich, MGM Resorts International and Jen Wong, Reddit discussed the challenges of keeping audiences engaged and how broadcast mediums are becoming engaging platforms. According to Tara Walpert Levy from YouTube, the future of communication relies on the true connection between creators and audience.

Social media presents challenges and opportunities for athletes, another interesting panel was Sports Zone, which focused on digital communication and social trends that was presented by NBA Commissioner Adam Silver, Twitter CEO Jack Dorsey, and moderated by ESPN anchor Rachel Nichols, where they discussed their innovative partnership for #NBATwitter and how organic tweets among athletes are key to develop an authentic connection with fans. 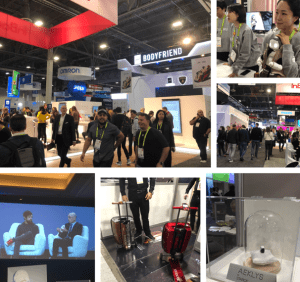 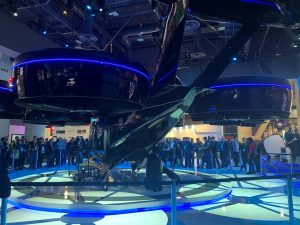 The world of Alexa, autonomous cars and AI

Amazon showcased a whole range of products for the home, office, cars in a highly interactive space with home security, smart display devices with voice command to control every space to LG

InstaView refrigerator with Alexa built. But Bell helicopter in my opinion, was the most impressive display and concept of future public transportation, just seeing the vertical-takeoff-and-landing was one of my most memorable moments at CES.

As the quest to resolve problems with innovative products continues, I’m particularly interested to see how AI, robotics and voice command technology like Alexa can go beyond convivence to make people’s life better.

First and foremost, I’d like to thank Southwest and CES for bringing a diverse group of entrepreneurs to experience a vibrant, innovative and highly hands-on event. CES needs to continue bringing diversity to the conference, in 2018, women were estimated to control about $40 trillion in consumer spending across the world and people of color hold a growing share of buying power in the U.S. 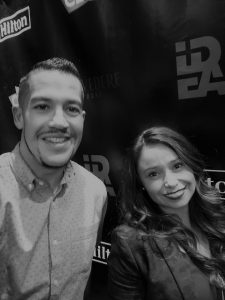 Consumer Technology Association (CTA) is the trade association representing the $398 billion U.S. consumer technology industry, which supports more than 15 million U.S. jobs. More than 2,200 companies – 80 percent are small businesses and startups; others are among the world’s best-known brands – enjoy the benefits of CTA membership including policy advocacy, market research, technical education, industry promotion, standards development and the fostering of business and strategic relationships. CTA also owns and produces CES – the world’s gathering place for all who thrive on the business of consumer technologies. Profits from CES are reinvested into CTA’s industry services.

Dallas-based Southwest Airlines (NYSE: LUV) operates more than 4,000 weekday departures among a network of 99 destinations in the United States and 10 additional countries. Based on the U.S. Department of Transportation’s most recent data, Southwest Airlines is the nation’s largest carrier in terms of originating domestic passengers boarded. The company operates the largest fleet of Boeing aircraft in the world. With 45 consecutive years of profitability, Southwest is one of the most honored airlines in the world, known for a triple bottom line approach that contributes to the carrier’s performance and productivity, the importance of its people and the communities they serve, and an overall commitment to efficiency and the planet.

How Influencers are Adapting to the Coronavirus Quarantine